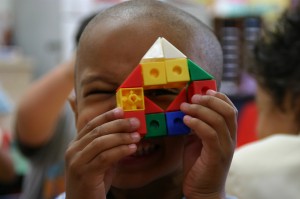 Autism is a developmental neurological disorder affecting people of all ages but is most evident and diagnosable at the prime developmental age of 3-4 in most children. While not everything is known about the disorder and its origins, it is generally believed that this disorder is genetic in nature. Children suffering from this disorder find it difficult to properly communicate and may tend to shy away from social interaction with adults and other children. They do not seem to behave like a normal child should and may look like they are “lost in their own world”.

They just seem to be different from other children – lost in their own thoughts and are comfortable to be alone. Most children with ASD seem to have tremendous difficulty learning to engage in everyday human interaction even during the first few years of life, many do not interact at all and totally avoid eye contact.

The parents of an autistic child often feel that their children are not attached to them at all. Autistic children often don’t cuddle, play or enjoy the company of parents and others in the family. They are mostly isolated with thoughts and distant themselves from everybody. They look totally detached from the planet earth at times. They have difficultly controlling their emotions and are very sensitive to sharp light and sounds.

But, Your Autistic Child May Be Gifted

Autism had a wide range of symptoms and it’s impact varies from person to person. For some children there is no speech and interactions are limited by cognitive behavior. For others it is high IQ and very odd interests and they would talk only about it and indulge in monologues about their interests. Some autistic children are also very hyper-active but some appear relatively dull and non-responsive. They usually find it difficult to make friends and so are often lonely and socially outcasted.

• Autistic children often do not speak a word till 16 months
• Does not speak two combined words or sentences for 2 years
• Do not respond when their names a re called
• They display poor eye contact and lack of concentration. They prefer to stay alone.
• They do not show interests in the toys which normal kids do.
• Do not interpret humor and don’t smile.
• Show very poor or no response socially which is normally mistaken as deafness.

The symptoms are more likely seen in male kids than on females. The ratio of this disorder in males to females is 4:1. Children with Autism need a lot of support, love and understanding and concern from their near and dear ones. There are specialists and special school for these children where they are taught to lead their life in a more socially responsive manner.

Working Towards A Cure For Autism

The causes of Autism are not known or confirmed. It is still a medical challenge and there is a wide range of research being conducted to find the causes and the cures accordingly. There is no known cure for this problem but you can train the children to handle their daily life and help them become more comfortable socializing with other people.  Some exercise and constant practices are been given to children to cope with this disorder. They are also subjected to herbal treatment to avoid the risks of the side effects. Please see the pages within to understand more about Autism.